Local legends, Norse myths, tales of the Otherworld – selkies, shape-shifters, wolves, the Good People; these are some of the subjects of Bob Pegg’s stories. They are rooted in the landscape of North Britain, and interwoven with music and song.

The music is played on the oldest and most basic instruments – stones and shells, ocarinas, reed pipes, the jaw harp, a Dark Ages lyre, an array of Native American flutes.

Most of the songs are Bob’s own, and all of them tell stories. He began his professional career as a recording artist with 1970s folk rock band Mr Fox, writing much of the group’s material – narratives like The Gipsy, an epic lover’s quest through the Yorkshire Dales, and the song Mr Fox itself, a version of the Bluebeard story, inspired by an English folk tale of the same name.

Bob has performed in venues ranging from a Viking farmstead in Borgarnes in Iceland to the Royal Festival Hall in London. His stories are told conversationally, as if they had happened just yesterday. He’s often asked to tailor programmes to fit specific themes and places: the seashore; an Iron Age fort; a primeval forest; a Pictish stronghold or the streets of a historic town.

Bob has worked in collaboration with individual artists, and in schools and community settings with people of all ages, from nursery groups upwards. Among his more recent projects are: Kings and Saints, a commission shared with harper Bill Taylor to commemorate the return of the refurbished Pictish cross-slab to Nigg Church in Easter Ross; Sounding Dunadd, working with Kilmartin House Museum in Argyll to produce four seasonal community events among the prehistoric tombs, the standing stones and the exotic rock art of Kilmartin Glen in Argyll; making Storymaps in collaboration with six Highland museums and their communities, with artist John Hodkinson.

Bob’s one-man shows include: Longstrider: John Rae of the Arctic -based on the life of the great 19th century Orcadian explorer, with song, music, verse and traditional story; and Warrior Blues – an hour-long re-telling of Homer’s Odyssey, from the lips of Odysseus himself, with music and a half dozen songs.

In early 2018 Bob created and recorded a five hour long satellite-activated story soundtrack for the North Coast 500 route, with Highland-based storytellers and musicians; and in June an expanded version of his 1996 CD The Last Wolf was issued by Talking Elephant Records.

Recent publications include Highland Folk Tales (2012), The Little Book of Hogmanay (2013), and Argyll Folk Tales (2015), all published by The History Press.

A version of The Seal Killer, from Highland Folk Tales, is included in the video series Storytelling: the Living Art 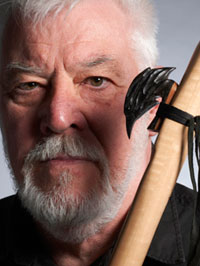