Ian Stephen is from Stornoway, Isle of Lewis and he travels widely as a sailor, as well as a performer and workshop leader. He graduated from Aberdeen University (B Ed with distinction) and is a committed educator. He was a coastguard watch manager in Stornoway before resigning to concentrate on work in the arts, after winning the inaugural Robert Louis Stevenson Award in 1995.

Guest lectures and performances include work at The School of Scottish Studies and University of Highlands and Islands. Ian is now a writer and storyteller as well as a volunteer skipper with traditional boat trusts on Lewis. His storytelling is indebted to his connections with the maritime world, developed during a Creative Scotland project to navigate through Scotland’s sea stories. But he also passes on Lewis stories which are so far unrecorded and researches and revives Hebridean tales. He is the author of ‘Western Isles Folk Tales’, which is illustrated by Christine Morrison.

Ian has a natural, informal way of telling and enjoys alternating humorous pieces with quieter and deeper work, seeking close contact with his audience. He is happy in the classroom, arts centres, ceilidhs and concert halls, radio studios and university seminars. Ian enjoys working with school pupils of all ages and backgrounds and has been involved in developing storytelling in many combined arts projects, like ‘Voyage’, which opened the 2013 Scottish International Storytelling Festival. ‘Acts of Trust’, with the visual artist Christine Morrison, won the multi-arts category in the first British Awards for Storytelling Excellence. His development of St Kildan stories was used as the basis for the Europe-wide St Kilda project. His own versions of St Kildan stories were performed with contemporary music and dance in Bonn and Cologne. His poetry and stories are published in many countries and have been translated into German, French and Czech. His first novel, ‘A Book of Death and Fish’ has been received to wide praise.

‘He sits like a master puppeteer to whose words everything must dance.’ (Saleem Peeradina, Express Magazine) 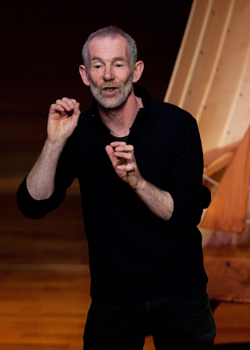