The centenary of Hamish Henderson, song-maker, poet, folklorist, activist and radical educator has mushroomed into a huge celebration. His life’s work was to transform Scotland’s view of itself, from the bottom up, and to re-affirm an outward-looking nation, through international solidarity. On 4th September, the Scottish Parliament resounded to Henderson’s words, and one could only reflect on his astonishing journey from the margins to the centre of this nation’s sense of itself.

The centenary has been a ‘come all ye’ affair. There is no central committee – a laughable concept given the Henderson style – but a network of people in their own contexts supporting and keeping in touch with others. This was evident in the launch by ‘The Poet’s Republic Press’ of The Darg at the Edinburgh Book Festival. There are more than sixty tribute poems in this anthology, all by different pots, and including Gaelic, Scots and English. How the man himself would have loved to be at that occasion, introducing every contributor, ceilidh fashion, with total inclusion and passion. The editor Jim Mackintosh captures it well:

‘Awaken
Tomorrow a determined sky
will rattle our horizons:
freedom
come all ye to hear the word.
And the oppression, the wall
And all else fades….’ 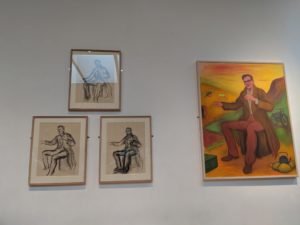 At the Scottish Storytelling Centre Fringe-goers were treated to Alexander Moffat’s magnificent group portrait of the folk renaissance – Henderson in the middle – reminding us that he was catalyst for the ‘Edinburgh People’s Festival. This is an inspiration the Centre still acknowledges and in the theatre below Henderson could be heard full-throated in Theatre Objectiv’s On the Radical Road, while at Saltire over the road, he and MacDiarmid were flyting once more.

In a quieter way, Henderson could also be heard in Dispatches on the Red Dress, Rowan Rheingan’s Berger-like evocation of European war. She sang,

‘We’d better make some room for sorrow
Or we will sing a darker tune tomorrow.’

And I could hear the Henderson Elegies in the aftermath of war:

‘So the words that I have looked for, and must go on looking for,
are worlds of whole love, which can slowly gain the power
to reconcile and heal. Other words would be pointless.’

There is more, lots more to come with ‘Hamish Matters’ in Cultybraggan and Blairgowrie, and ‘The Carrying Stream’ in Edinburgh – all in November, events in the Storytelling Festival in October, a tribute concert in the Queen’s Hall on 6th December, and a World’s Room special in The Waverley also in December. 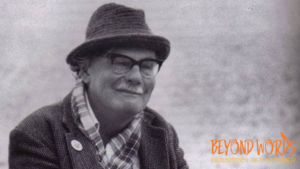 Why is this catching on now? Because of the rise of the right, the assault on internationalism, the climate emergency, and people’s hunger to re-connect with what really matters rather than mass media manipulation and social media scams.

In the struggle with deathly powers, Henderson affirms life,

‘Quo life, the warld is mine,
An open grave is a furrow syne.
Ye’ll no keep my seed frae fa’in in.’

And in final reflection he pitches his intimate muse as just one voice in a bigger flow,

‘Change elegy into hymn, remake it –
Don’t fail again.  …………..
Makar, ye maun sing them –
Cantos of exploit and dream,
Dain of desire and fulfilment
Ballants of fire and red flambeaux…
Tomorrow, songs
Will flow free again, and new voices
Be borne on the carrying stream.’

Once heard, the voice of Hamish Henderson cannot be forgotten. Freedom come all ye- time to awaken. Donald Smith