Congratulations to Kalubi Mukengela–Jacoby of Indigo Dance Company who, following our open call, was selected for the new Traditional Dance Residency through the ongoing partnership between the Traditional Dance Forum of Scotland and Dance Base – Scotland’s national centre for dance. Kalubi’s residency will take place at our partner’s beautiful studios in Edinburgh this spring, 13–17 March 2023.

Congraturlations, also to the dance artists Charlotte McLean, Kae Sakurai, Eilidh Ellery and Oxana Banshikova who secured a mentorship session from either Traditional Dance Forum of Scotland or Dance Base.

Kalubi is planning to collaborate with drummer Nemo Ganguli and use this residency as a starting point to research, codify and develop the traditional Luba and Kuba dances of the Democratic Republic of Congo. This is the first exploration of its kind of these Congolese traditional dances which are in danger of being forgotten. Tradition changes with time and Kalubi is interested in exploring how traditional moves can remain relevant nowadays.

What is African contemporary dance and what does it look like? What are the steps, the rhythms and the meanings of ancestral movements passed on from generation to generations to ultimately make their way into the 21st century? 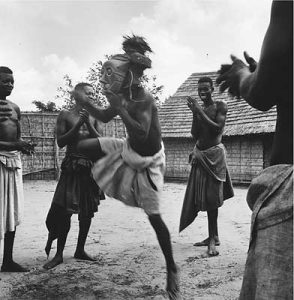 Kalubi has been dancing, singing and acting since she was three years old and started with traditional Luba dance. She was born and grew up in Belgium and moved to Scotland to train at the Scottish School of Contemporary Dance. She received her Master’s Degree in Dance Science and Education from the University of Edinburgh. Kalubi believes that amazing things can come out of the cross over between different cultures.

Can’t wait to join us for Kalubi’s residency sharing at Dance Base?