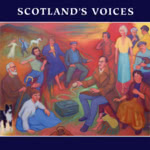 TRACS is proud to present a programme of activities in celebration of Scotland’s folk traditions, delivered by contemporary singers, musicians, activists, poets and thinkers inspired by Hamish, allowing you to dive deeper into Henderson’s life, work and legacy, to get to the root of “Why Hamish Matters”!

There has been a resurgence of interest in Henderson’s extensive body of work since the release of a documentary feature in 2016, produced by Bees Nees Media. Fred Freeman effortlessly puts Henderson’s life and work into context, interspersed with recordings written by his friend and colleague, at ‘Hamish Henderson’s Carrying Stream’ on Wednesday 31 July, 5pm, as he states:

“11th November, 2019 marks the centenary of the birth of Hamish Henderson, a man who personally accepted the surrender of Italy during WWII; who wrote award-winning war elegies (which bear comparison with Sassoon or Owen); who was a prime mover in founding of The School of Scottish Studies; and influenced, quite directly, the course of 20th-century history.”

Fred’s insightful talk is followed by a private viewing of Alexander Moffat’s exhibition – giving context to the pivotal figures captured on canvas which are accompanied by preparatory studies – ahead of ‘The Ceilidh House: Come All Ye’ at 7.30pm which showcases the joy of traditional arts live. Featuring Jess Smith (singer & storyteller), Charlie Grey (fiddler), Tina Jordan Rees (dancer) and David Francis (MC & caller) there’s chances to participate in jovial company or just soak it all in, as Programme Manager, Daniel Abercrombie states:

‘The ceilidh house was (and is) where the traditional arts of dance, music and story come together to be shared and enjoyed. TRACS exists to encourage the practice of those arts and to make them accessible to all. Our event aims to capture the spirit of the old ceilidh house where all are welcome!’

Then, as part of the Edinburgh Festival Fringe, enjoy Theatre Objektiv’s ‘Hamish Henderson: On the Radical Road’ (2 – 26 August), an evocative drama sculpted from the poetry, music and songs of Hamish with a dynamic, ensemble delivery.

Scotland’s folk revival continues, and these events are the perfect opportunity to stimulate!