Schottisch – a Scottish country dance at least in name, also known as Eccossaise in France where it originated in the late 18th Century – is considered a folk dance in Germany. To this date Schottisch, also known as Ecossaisen-Walzer and Schottisch-Walzer, is still danced all over Germany and Europe. It was popular in the ballrooms across the world during Queen Victoria’s reign as part of a folk-dance craze before polka took its place.

In Germany, we feel obliged to keep the intangible cultural heritage of Schottisch – this partnered country dance, more of a cross between a slower polka and a Scottish Highland old reel. We feel obliged to preserve the knowledge and skills entrusted to us, alive, to pass it on and to develop it further. We believe that traditional dance is not only a contemporary socially-engaged creative practice but a lust for life that brings us together.

These are some of the thoughts we, at Traditional Dance Forum of Scotland exchanged  with our brand-new partners from Folk Dance Society of Germany (Deutsche Gesellschaft für Volkstanz e.V.) during our first online Zoom meeting in early October 2022.

As part of this initial research about the German folk dance culture in relation to the international trad dance scene in Scotland, we identified Folk Dance Society of Germany (Deutsche Gesellschaft für Volkstanz e.V.) as our counterpart organisation. We are grateful to the Goethe-Institut Glasgow, which has a mandate to encourage German-Scottish cultural exchange, for facilitating this initial research. As organisations advocating for the advancement of participatory traditional dance in our contemporary world, we also both champion traditional dance as an integral part of our global intangible cultural heritage. Our organisations are both led by voluntary boards of trustees serving a growing membership base of trad dance practitioners and groups from across our respective countries.

We believe that our new partnership will allow us to explore the potential for shared learning, initiate a series of new collaborative projects, exchange visits, festival contributions, new dance artists residencies and archive research about the links between today’s folk dance scenes in Scotland and Germany which we encapsulated in the play on words project title of our collaboration Strictly Scottish and Schottisch. 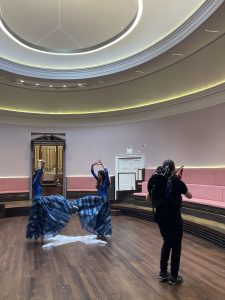